The builders are in next door. Their constant banging, awful radio and flatbed loading and unloading seem to be trying to cut through my records with alarming zeal. This is, as one can imagine, fucking infuriating. The most infuriating part of all, however, is the Geordie foreman, who seems to marshal the troops by speaking as loudly as he possibly can. It's as if the North Eastern Public Speaking Championships are going on right outside my thin-walled 2 bed Manchester apartment.

Add to that the chav-wear shop 2 doors down who insist on blaring JLS, Example and Ed Bloody Sheeran at full blast and the rattle of traffic spinning through Central Manchester and it's rather hard to concentrate on doing my work, reading or, most annoying of all, me time! 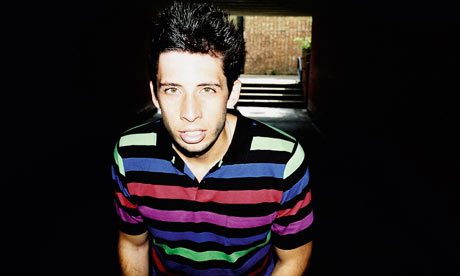 Quite why people feel the need to listen to Capital Radio or perfect their human megaphone skills every day is beyond me, but why they have to do it within any distance of me just pisses me off.

Rihanna - Umbrella: Now while Ri-Ri (as I'm told she is to be called now) is extremely easy on the eye and does have a few catchy tracks, dare I say it, even good ones, there was a time a few years ago when you couldn't move without hearing this. It was number one the whole way through a rainy summer (oh the irony!) and was, and is, utter dross.

Ed Sheeran - The A Team: Why does anybody think this or anything else he's done is good? It's not. Turn it off.

Florence and the Machine in General: Seemed OK at first and then after four or five listens I realised it's shite. The problem is, since 2008, or whenever they decided to burst into our lives, they've not buggered off. Florence, Machine, please do.

Tinie Tempah - Written in the Stars: He has to be one of the worst rappers ever. Up there with MC Tunes (had a couple of tunes with 808 State, check them out on Youtube for a laugh) and Vanilla Ice. He took what was a great backing track for Pass Out and put lines like "I've been Southampton but I've never been to Scunthorpe" over it. This one, however, lacks even a decent tune behind it and is, in turn, a niggling, persistent annoyance.

N-Dubz in General: Don't get me started.

So there you go, I've most certainly not covered everything, these are just the ones that stick out as I'm writing this. If you're reading this and have a suggestion or two, feel free to comment below with them. It's always best to vent frustrations and get them off your chest.