In Tribute to Fergie

Of all the accolades that Sir Alex Ferguson has received throughout his storied and glittering managerial career, surely number 1 on his list must be having a Black Eyed Pea name herself after him. Indeed it was that Prince William was thrilled at this same triumph and Steve Jobs was gushing when his company had the accolade bestowed upon it too. But Ferguson had the one who wees herself onstage in outbursts of punk irreverence and sings about her humps and her lovely lady lumps, as well as cleverly outwitting London's tourist board by confusing tourists into the city into thinking one bridge was actually the other (surely Fergie Snr. must have loved this, being a Glaswegian-cum-converted Mancunian).

Alas though, we have news today that he is retiring now with a huge old trophy haul, a ridiculous bank balance and, if his purple nose is anything to go by, a fine collection of single and double malts. His unmatched record stands by itself - perhaps only Jose Mourinho will be able to ever match or beat it (or, if he keeps on working on the principle of 'go and manage the best team in Europe, you're bound to win a European Cup', then Pep Guardiola may). So Alex passes, not with a whimper, but, rather, a blaze of glory - a 13th top flight title gained weeks before the season's end.

He got there with good old fashioned hard work too. Sure he has a talent for building squads, but, by all accounts, he's a grafter is that Fergie, and he has justly received his rewards. His cantankerous manner - be it with the BBC, referees or Becks - gives off an air of an old-fashioned, no-nonsense coach of the ilk of Paisley, Clough and Busby. He has stuck with some familiar (familial?) people throughout his years at United, Ryan Giggs and Paul Scholes in particular , but also David Gill as Chief Executive of 14 years' standing deserves a mention. But it's clear that Ferguson is not one to get stuck in his ways either - his regeneration of squad after squad proves his ability to look to the new. 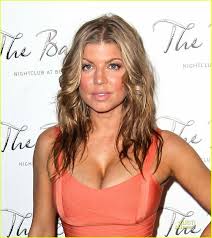 The other Fergie - they look alike don't they? She's obviously had work done to look like her hero...

So it is, probably with a heavy heart, that many in the football world will wave goodbye to old Fergie. The Hairdryer, Fergie time, squeaky bum time, it will all go down in football folklore, while Manchester United, one feels, will continue to thrive with the wise old Scot now in a directorial position. So as he leaves, no doubt with the choruses from 'Shut Up' and, in a whim of poignancy, 'Where is the Love?' ringing around Old Trafford, Fergie will be elephunked, sorry, elevated into the heavens around the Theatre of Dreams. The streets of Salford and Trafford will be littered with grown men on the final day of the season, all tearful, arm-in-arm singing Fergie's name and hoping that tonight's gonna be a good night. Fergie will go out and smash it, like all his dogs, and that will be that: the end of an era.


For your listening pleasure... in tribute to Fergie