Right, I'm going to write a weekly post on great songs from today onwards, starting with Procol Harum's A Whiter Shade of Pale and carrying on with great tracks from way back to modern day stuff, in no particular order or chronology. This post will be updated every Tuesday and will feature among other blog posts. So here goes nothing...

A Whiter Shade of Pale was released in 1967 and stayed at number one in the UK charts for six weeks! Not bad for a debut single.

I've always felt that this is the greatest song to ever be written about nothing in particular. I mean, the words mean nothing do they? "You skip a line fandango/turn cartwheels across the floor". What? But its not the songs lyrical content that makes it great. All that talk of waiters, sea-sickness and playing cards is rather psychedelic, yes, but life-affirming, no. What makes this song great is purely sonic... 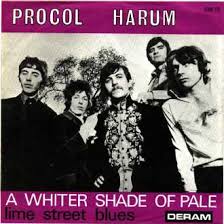 That organ melody, those chord changes, why, it's actually Bach is it not? Doesn't matter, it's pure ecstasy, whatever it is. Timbrally, I've always thought of this song as being evangelical, it feels as if one day a rock band went to a church and recorded a track, but not just any old church, this one would have to be The Sistine Chapel or Westminster Cathedral or somewhere equally grand. The song's production gives it that. That slight echo, the feeling of all the instruments being crucial, the emotional vocal. It really has a feeling of togetherness.

Procol Harum knew what they were doing though, each member was a fine musician in his own right and thus, the song feels assured, like this was constructed out of nothing and was recorded in one take. Great pop music does that. All great pop has that effortless feel, it creates an illusion, a myth. It leaves the listener in a transcendental place from which they may never come back.

A Whiter Shade of Pale is a journey. It's a bloody beautiful melody with a whole feeling, like completeness, yet still leaves the listener wanting a bit more.

I understand that there's a bit of nostalgia working it's magic on me here. 1967, summer of love, Sgt. Peppers and all that holds a resonance with me. I wish I'd been alive back then to experience it all first hand, alas I wasn't. The second hand experience I have with it all will do me just fine, however. Again, I must stress, great pop music can create its own nostalgia.

In all, this song is, in my view, a great song because it conjures up emotions of melancholy, joy, fear and love purely through its sonic attributes. Any song that can do that to so many people is great!