Today marks the start of a weekly post in which I fill you in about a new unsigned band from... Scotland (hence over Hadrian's Wall). Hope you enjoy it!

If you are in anyway a fan of the output of late ‘80s/early ‘90s Seattle label Sub Pop then read on! Glasgow's Male Pattern Band have the kind of lo-fi sensibility coupled with catchy hooks which could easily have been released through that label. Their recording ethos seems quite simple; hit ‘em with one take of distorted guitar, semi-pissed-off vocal, dry as hell drums and barely audible bass. The verses lull, the choruses scream and one gets the feeling this rabble spend half their time necking Glasgow's finest malt (or Buckfast) and the other half trying to convey the kind of sonic message that the likes of Yuck are having quite a bit of success with right now.

The band’s self confessed stance is “junkyard pop” (incidentally the name of their self-released 2010 EP) and one listen to the tracks Wilt and Raining (from that disc) leaves one with little argument against this summarisation. 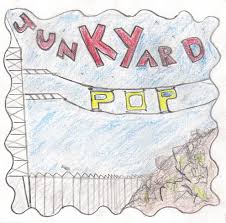 Having had a couple of notable support slots for the likes of The Vaccines and The Smith Westerns, it seems MPB may be causing a bit of a stir in that easiest of arenas to do so: the indie underground and you can see why as this group do have some catchy tunes. It feels, as you listen to the rather crude recordings, that if they are produced in just a slightly more polished fashion, the kind of praise and success currently being eaten up by the aforementioned Yuck may be bestowed upon them as well.

As it is, MPB conjure up nostalgic memories of some of America’s greatest alternative and garage rock groups. Cable Cloth, also from The Junkyard Pop EP, has the slow-burning, heroin-chic glamour of The Velvet Underground, Pouring is a hybrid of Strokes-cool and The Stooges mayhem and The Last Supper has a Sonic Youth appeal juxtaposed with the ramshackle of The Libertines (British, I know).

Glasgow may not have the glamorous musical history of London, New York or New Orleans, but Male Pattern Band could be emerging at just the right time to change all that. Lo-fi is on the up again, maybe as a reaction to the last few years of silkily produced synth-pop and soul revivalism, and these young men (guitarist/singer/songwriter Chris Mcrory, bassist Craig Nock and drummer Gareth Wilson) could ride on the crest of this wave. They could, however, fall underneath its weight as so many of those late ‘80s/early ‘90s types did.