Here it is... a banal recap of the year just gone - Wiggo, Ennis, Osborne, Boris and Woy. And in music The XX released the follow up to their Mercury prize winning debut, Emeli Sande broke onto the scene and the Justice for the 96 campaign was Christmas Number 1. In literature we had the fervour of Fifty Shades and, in turn, millions of Random House copycats like whatever Silvia Day decided to put out. In film we had a fantastic new Bond and the adaptation of Les Mis. In television we saw the final nail in the X Factor coffin. Right, that's that then. Now for some real comment.

Firstly, 2012 was the year when everybody lost their mind in grotesque over celebration and flag waving. In the same year that it was called to pass that a referendum would eventually take place on splitting the Union, ironically everybody went nuts for waving the flag of that very alliance. The Jubilee, the Olympics and the Paralympics provided a platform upon which the nation could zealously scream "we're proud" in an almost imperial fashion. The most ridiculous thing about the whole charade was the masses of nutters getting pissed on, watching an elderly pair of toffs have exactly the same happen to them on a quite ludicrous boat on the Thames. Me, I watched it scornfully from the pub, moaning about the cost to the taxpayer. 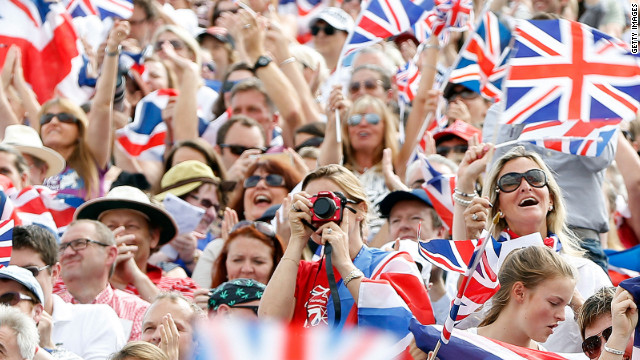 Just look at them

Another ridiculous national trait this year was in some ways related to the abovementioned. It came out of the moronic wish that football fans and players would behave like their Olympic counterpartts. It really is like comparing bollocks to mud - they are two totally different beasts. The Olympics is an event which comes around every four years and roughly once every blue moon to the same city and is filled with audiences who really do not have the first clue about what they are watching other than that they want their home country to win. By contrast, football is on throughout about 10 months of the year every year with a fan base that watches it religiously, knows each player and is, on average, pretty clued up about how the game works. Add to that the fact that the fans on the terraces spend a good deal of their hard-earned cash on going to watch their beloved sides one day a weekend and possibly a midweek evening and the passion, the tribalism and the hysteria are only multiplied. It won't be all dandy smiles and kids singing along - as Bill Shankly once said "some people think that football is a matter of life and death. I can assure you it's much more important than that".

2012 was also the year, however, that the music industry hype machine slowed down somewhat and, alas, some great records came out off of the back of it. Tame Impala, Yeasayer and, as mentioned, The XX released fine albums with Lonerism, Fragrant World and Coexist respectively. Tame Impala particularly could have been destroyed by the frantic 'buzz' that bags on a new band, beseeching them to be heroes of their generation, however, a steady rise and a sonically intriguing/radio friendly single such as 'Elephant' gave them a platform from which to become something more than could have been maybe had they exploded between the years 2001 - 2011.

2012 was a daft year really. The Rolling Stones turned 50 and had punters paying through their noses for the pleasure, the Olympics turned the UK into a nation of stirring sycophants and for once nobody believed England could win a major tournament (low and behold they didn't). Gone was our usual grump - replaced by the inverse. No doubt 2013 will restore the balance what with the onset of more economic trouble, possible Syria intervention, the possibility of the war to end all wars if Iran and Israel kick off and no "great summer of sport" keeping everybody's eyes away from the real issues. I'm going to make sure I read some of the acclaimed novels of 2012 that I didn't get round to perusing (namely Will Self's Umbrella and Hilary Mantel's Wolf Hall) follow up and watch The Bourne Legacy (again, I didn't get round to this in 2012) and keep enjoying some of the wonderful sounds of 2012 (aforementioned). Behind me I shall put the nauseating flag waving and pageantry and Wiggo - everybody's new favourite mod. I cannot stand the milking poser personally.

Labels: 2012, Tame Impala, The Jubilee, The Olympics, The Rolling Stones, The XX, Yeasayer