This time last year (almost to the day) I wrote a scathing attack on the Madonna half-time show at the Superbowl (available here). I went on to harangue the whole sport of American football and seemed to be, basically, fucked off with the whole idea of the showpiece of American sport - mainly due to the lack of sporting action and the grotesque 'world peace' Madonna halftime show.


Well, this year I decided, against my better judgement, to stay up until the wee hours and watch the thing. I've got to say I'm unchanged. The Superbowl is gross. The sport itself is almost unwatchable with way too many stoppages and time-outs - the amount of which left me wondering when each quarter might end. There are points at which the game sparkles, this I cannot deny. The guy from the Baltimore Ravens sprinting the length of the pitch in about 11 seconds to touch down was a real highlight for me, but, frankly, these moments are too few and far between. It also seems quite nonsensically tactical, to the point where a layman has no chance of getting into it. It's not fucking chess! It's basically rugby with shoulder pads and forward passes (this rule, one would hope, would make it less tedious than watching Harlequins play Saracens - it doesn't, and quite frankly watching rugby is about as engaging as taking the bins out). 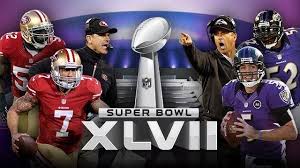 It looks enticing, doesn't it?

Anyway, the slow-burning sporting action aside, there's always the half-time show right? Well to my mind this was equally as insipid as the roided-up nutters lobbing the red egg about (or, rather, stood waiting to lob the red egg about). Maybe it's because I'm not the biggest Beyonce fan in the world, but I just wasn't as enamoured as some of the people on my Facebook and Twitter feeds seem to be with it. Annoyingly, as I quite like a bit of Destiny's Child - particularly 'Jumpin' Jumpin'' - there was only a quick flash of them doing that rather annoyingly overplayed Charlie's Angels tune and a Beyonce solo song before they were gone.

I'm just not convinced that Beyonce's as great as everybody thinks she is. I really cannot see what she's got over, say, Amerie or Kelis other than the fact that she's shagging Jay Z. Her voice gets on my last nerve too. Listening to that 'Halo' number is, I imagine, how tinnitus feels at 4 in the morning on a Tuesday.

Anyway, the Superbowl is over-the-top nonsense dressing itself up as a sporting occasion. No matter how much of global culture America permeates, this kind of sporting event, I hope, will never become the norm. Imagine if, during the World Cup final, Spain had kept calling 'time out' and the match had been divided into four quarters. Imagine if Britney Spears had come flying out at half-time to squeal her back catalogue through your TV set. Surely even the Chinese couldn't come up with a more tortuous experience (and they certainly wouldn't have the gall to call it entertainment).

I'm not phobic of our cousins across the pond or their culture. Far from it. I think it's one of the most fascinating, diverse and interesting cultures in the world. I love American literature, be it William S. Burroughs, Bret Easton Ellis or Mark Twain. I think that musically they've contributed as much as anybody over the last century - just look at REM, Bob Dylan, Patti Smith, Nrivana, the list is too long. Hollywood - though certainly sometimes dealing in the banal - is a fine artistic institution.

I've always dreamed of spending a year of my life in the US, in fact, soaking up the deep south and New York City, feeling that strange pang of mortality at the Grand Canyon and standing at the gates of The White House. It's just this other form of Americanism that gets to me - the far less romantic, Las Vegas style pointlessness and pageantry. It's often actually amplified in the presidential elections (at least these only have the cheek to rear their heads every four years though). It's all incessant whooping and screaming and, of course, somebody singing 'Star Spangled Banner' (though I must concede that this is a great song, it is over the top and just a bit self-serving).

I wish those stadium lights had stayed off. In fact, I wish the other half had gone out.