The Bluth Family are back. The dysfunctional clan, who it's not glib to say (OK it is, but I'm going to) are somewhat like a 21st Century Simpsons with a fortune, have been resurrected by their creator Mitchell Hurwitz with the backing of the online streaming giant Netflix after they were dropped by Fox (the comparison with The Simpsons ends there really, with one dropped way too early by Murdoch's media behemoth and the other left running way too long).

Anyway, I was a tad apprehensive as to whether bringing back Arrested Development was going to prove to have been the right thing to do, but, having now watched the whole series (due to Netflix releasing all 15 episodes in one go on Sunday), I can honestly say that my fears have been completely assuaged and, in fact, I now wonder why I was worried.

One of the main reasons AD always worked so well as a comedy was the strength of the characters in it. Whether it be Tobias's uber-camp, fumbling idiocy, GOB's daft dreaming and complete self-awareness by-pass or Lucille's reprehensibly discriminatory beliefs and conniving control of her children, the characters are so well realised, and were throughout the first three series of the programme, that it was inevitable that this series would work as long as the writing was still as sharp, subtle and intricate as it always had been.

This has remained the case. In fact, this may be the most layered and byzantine series of the lot. The premise is that each episode focuses on one character and the whole series represents the story, but everything is so neatly done that one really cannot afford to miss a scene as it will almost certainly appear later on in the series as a pivotal moment. A bit like a concept album, this series of AD really challenges whoever is engaging with it to do just that and not to step away.


Netflix's original trailer for the show

Various farces occur and yet still seem believable due to the nature of the writing, but also cardinally due to the fine acting. For instance, GOB, who for what it's worth is my favourite character in the show, is played so brilliantly by Will Arnett that he comes across both utterly condemnable by his actions yet completely forgivable for his lack of intelligence - much like many a friend we all know and love. There is something rococo about the way each actor plays their part, as if they've gone Daniel Day Lewis and ended up making the characters extensions of themselves, forging a bond with the viewer which is so remarkable that it leaves one feeling as if they know and are a part of the Bluths in some way.

What are also key to the success of this series of AD are the slight changes that have taken place. Michael is now a far more pathetic character, crestfallen and unworthy and has, in turn, lost some of the moral compass that kept him above the other Bluths as a person. He has also seemingly lost his paternal control over George Michael in some way giving a slightly Oedipal counterpoint to their relationship. Indeed, the incestuous and maniacal relationships that have always pervaded AD still abound but have been altered to reflect the passing of time between this and the last series - so now George Snr. is in many ways now out-maneuvered by his formerly more naive and laidback brother Oscar, Lucille is a little more dependent on her children than she was before and Lindsay is further detached from Michael as his stock has fallen. 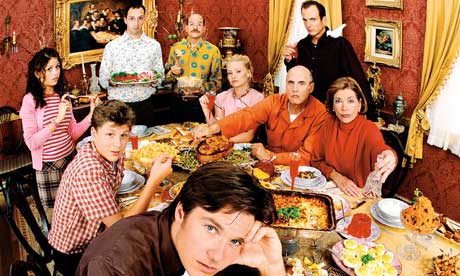 The Bluths of old...

Great sitcom writing, and, in fact, great fiction writing in general often hinges on the likability of characters whose foibles are so obvious. As Ricky Gervais and Stephen Merchant did with Brent and Gareth, as Brett Eaton-Ellis did with Victor Ward and as  Mark Twain did with Huckleberry Finn, Hurwitz has once again managed to manipulate otherwise dire views into both hilarity and a comment on ignorance and surroundings as opposed to innate evil or disquieting outlooks.

The new series of AD is wonderfully funny. I'd nearly go as far as to say that if Netflix want to find tax loopholes for the next 50 years they can, as long as they keep commissioning such commendable entertainment, but I cannot and so hopefully they can keep providing such fine (semi) original shows and also contribute a bit to our deficit. I'm sure that the ultra-Republican Bluths, on the other hand, would feel slightly differently.