5 of the Best: The Smiths

Since getting the Complete box set for Christmas The Smiths have been playing more often than even usual in my home. With one of the greatest guitar bands to ever surface from Britain in mind, here's 5 of their best. 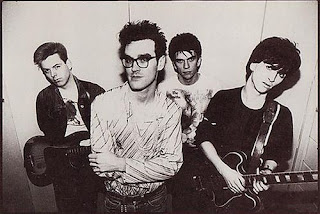 Half a Person - Everybody was 16, clumsy and shy at one point and Morrissey's superb lyric in this song, coupled with a nostalgic, sad and touching arrangement make this one of the best, let alone theirs.

Ask -  "Writing frightening verse to a buck-toothed girl in Luxembourg". It doesn't get much better than that. This song so wonderfully counteracts all of the 'miserable' tags applied by lazy types with no facets to their musical taste other than "if it's about a night out I like it, if it challenges me, no thanks".

Bigmouth Strikes Again - Johnny Marr's breakneck rhythm playing and surging, single string leads make this song one of the guitar performances of the eighties. Far simpler axe-work than the stuff on Some Girls Are Bigger Than Others and the like, yet no less stupefying, it is, frankly, a masterpiece. The Morrissey bits are not 'alf bad either.

This Night Has Opened My Eyes - A dream-like work of textural space and total catchiness, this song finds Morrissey floating a breathy, sumptuous vocal over the top of some really great stuff from the rhythm section and almost unfathomably ear-catching guitar work from Marr. Marr's philosophy of playing as a whole band with one guitar is at points on full display and at others out of the window. Fantastic song.


This Night Has Opened My Eyes

This Charming Man - A song that defined its era with lyrical dexterity, simple harmony and a rather intricate, instantly recognisable  riff that, as Noel Gallagher puts it, "even Johnny Marr can't play that properly anymore". Probably The Smiths' London Calling or Losing My Religion, yes, but also one of their best efforts.