I own a John Lennon figurine. Is this sad? My girlfriend seems to think it's the saddest thing a man could own. When I was buying it she told me that it was a complete waste of £12 (I thought it was quite the bargain personally) and that toys were for kids. It is not a toy! John Lennon is one of my absolute music heroes and if I want to get a miniature model of him in his New York City phase then that's fair enough isn't it? 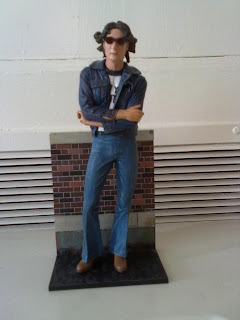 John inspired so many of the great artists that came after him and inspired millions of people to have a more idealistic view of the world (me for one). Sure some people scoff and say he was naive, that is purely because they don't have the capability to just dream and empathise with a world free of hatred. I know that in real life John is reported to have had his moments - violence, heroin addiction, sarcasm - but I just believe that adds to his humanity.

Along with Joe Strummer, Morrissey and Eminem I can't think of a better pop lyricist and can't think of anybody as iconic in the history of popular music (with maybe the exception of Elvis Presley). You say "John Lennon" to anybody in the world and they know who you mean.

So I can get a fucking figurine of the man if I want! Look at his fucking track record! He's a bloody modern day Beethoven! Alright!